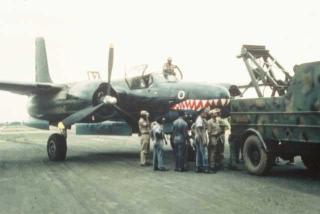 The Nigerian air force did not get a combat capability until a number of Mikoyan-Gurevich MiG-17 aircraft were presented by the Soviet Union during the Nigerian Civil War. On 13 August 1967, following several damaging attacks by Biafran aircraft, the USSR started delivering first MiG-17s from Egypt to Kano IAP, simultaneously sending a large shipment aboard a Polish merchant. Initially two MiG-15UTIs (NAF601 and NAF 602), and eight MiG-17s (NAF603 to NAF610) were supplied to Nigeria. Later six Il-28 bombers, flown by Egyptian and Czech pilots, were delivered from Egypt and stationed at Calabar and Port Harcourt, and, the Air Combat Information Group says, ‘were used to bomb military and civilian targets indiscriminately’.

The Biafrans managed to set up a small yet effective air force. The BAF commanders were Chude Sokey and later Godwin Ezeilo, who had trained with the Royal Canadian Air Force. Early inventory included two B-25 Mitchells, one B-26 Invader (piloted by Polish WWII ace Jan Zumbach, known also as John Brown), a converted DC-3 and one Dove. In 1968 the Swedish pilot Carl Gustaf von Rosen suggested the MiniCOIN project to General Ojukwu. By the spring of 1969, Biafra had assembled five MFI-9Bs in Gabon, calling them “Biafra Babies”. They were coloured green, were able to carry six 68 mm anti-armour rockets under each wing and had simple sights. The six aeroplanes were flown by three Swedish pilots and three Biafran pilots. In September 1969, Biafra acquired four ex-Armee de l’Air North American T-6Gs, which were flown successfully to Biafra the following month, with another aircraft lost on the ferry flight. These aircraft flew missions until January 1970, flown by Portuguese ex-military pilots.

Biafra broke away from Nigeria in 1967, seven years after Nigeria achieved independence from Britain. In 1960, when independence came, the Ibo people of eastern Nigeria, who-under British colonial rule-had become an educated elite and were now essentially a privileged class, assumed economic and political dominance in the new nation. This alienated the less privileged Islamic Hausa people of the north, who rioted against the Christian Ibo. In an effort to establish some semblance of home rule, the Nigerian government divided the nation into three states, corresponding to the territorial concentrations of the Ibo, the Hausa, and the Yoruba peoples. Far from bringing peace, this prompted the Ibo to secede from Nigeria. After the military governor of the eastern region, Lieutenant Colonel Chukwuemeka Odumegwo Ojukwu (b. 1933), declared an independent state of Biafra on May 30, 1967, the new country’s Ibo army went on the offensive and made a major push toward the Nigerian capital of Lagos. The Nigerian army stopped the advance and counterattacked, invading Biafra and overcoming stout resistance to capture the Biafran capital, Enugu, on October 4, 1967. This was followed by peace negotiations early in 1968, which, however, came to nothing.

As the Civil War continued, the Nigerian government- determined to bring the oil-rich area back into its territory waged total war against Biafra, mainly in the form of a blockade, which created a famine throughout the region. European powers intervened in the struggle, the British, the Soviets, and Italy giving aid to Nigeria, whereas France supplied arms to beleaguered Biafra. For the new nation, however, it was a losing battle. Port Harcourt, Aba, and Owerri, all key cities, fell in 1968. Although Owerri was retaken in 1969, the Biafran army was overwhelmed by a counteroffensive from a now well-equipped Nigerian army of 200,000 men. Biafra’s military defeat took place against a background of great civilian suffering, as the nation’s name became an international byword for want and starvation. Biafra surrendered to Nigeria on January 12, 1970. Ojukwu fled to exile in the Ivory Coast. Civilian losses in Biafra topped 500,000, almost all from starvation and diseases related to malnutrition.