Haruna at her moorings near Kure, Japan, under attack by U.S. Navy carrier aircraft, 28 July 1945 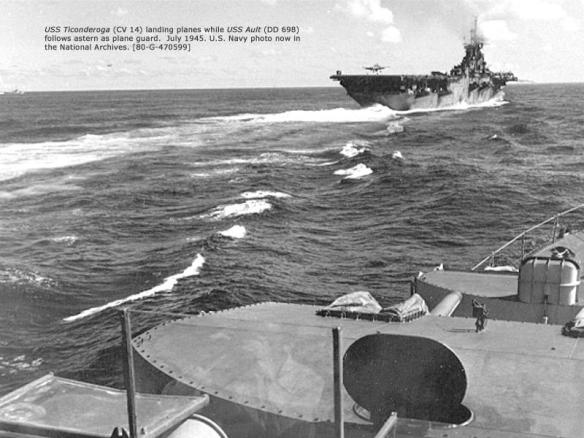 Wreck of Tone at Kure
The Heavy Cruiser Tone, sister of Chikuma survived many battles and was sunk at anchor in Kure harbor by US carrier aircraft on July 24th 1945. Her hulk was scrapped between 1947 and 1948.

After Okinawa had been taken and with the rolling up of the Japanese empire in Southeast Asia progressing satisfactorily, the Americans decided to bring the war home to the Japanese people by carrying out a mix of attacks – massive carrier raids on air bases around Tokyo and the naval facilities at Yokohama; the bombardment by surface warships of principally iron and steel works on the main island of Honshu- and in southern Hokkaido; and bombing sorties on shipping found in the Tsugaru Strait between these two northern islands. In a series of attacks that began on 10 July and spread over eight days featuring no less than fifteen carriers, eight battleships, fifteen cruisers and fifty-five destroyers belonging to Admiral Halsey’s TF 38 and supported by three carriers, a battleship, six cruisers and fifteen destroyers from the BPF for the latter part of the operation on 16-18 July, extensive damage was done. Forty-seven naval craft of various kinds were sunk, the battleship Nagato was made inoperable, while the two new carriers Amagi and Katsuragi, the battleship Haruna and forty-five other vessels were damaged. In addition, well over 5,000 rounds of 5-16 inch (127-406 mm) shells rained down on industrial targets on the home islands.

This operation was followed by one led by Vice-Admiral Jesse Oldendorf at the head of TF 95 in which the principal focus was on shipping in the East China Sea, the Yangtze River estuary and the Yellow Sea. It lasted nearly a month (16 July-12 August) and was one of Oldendorf’s least successful and more frustrating ventures. He lost a destroyer sunk, another two damaged (one of them grievously) and the battleship Pennsylvania torpedoed, for little positive gain. It was not often that Japanese submarine operations became anything other than a by-word for frustration, but in what turned out to be their last sortie with kaiten torpedoes they at last showed what they might have been able to have contributed to the war effort had they been used properly in the past: I-53 armed with two kaiten sunk the destroyer escort Underhill and I-58 damaged the destroyer Lowry on the night of 27-28 July. A couple of nights later I-58 struck again – this time with conventional torpedoes – hitting the US heavy cruiser Indianapolis twice and sinking her. Unbeknown to Lt-Cdr. Mochitsura Hashimoto, his victim had already brought parts of the atomic bomb from San Francisco to Tinian and was on her way back to Leyte when he found her running alone east of Luzon and sent a salvo of six torpedoes in her direction. Only 316 out of the total number of 1,199 officers and crew survived the sinking. I-58 continued to use her kaiten to attack convoys but further success narrowly eluded her on both 10 and 12 August.

Although most of the naval action in the Pacific had been concentrated in the central and southwest regions in 1945, American task groups – usually consisting of a cruiser division and a flotilla of destroyers – had continued to make their presence felt further north by indulging in a series of periodic visits to the Kuriles where they would spend usually a couple of days shelling enemy positions around Paramushiro and Matsuwa without attempting any amphibious operations. One suspects these sorties were designed to be a monthly reminder to the Japanese military that the Americans possessed the strategic and logistical reach necessary to tackle all parts of the empire and that the physical damage wrought by these raids was if anything rather secondary in importance to the psychological blows they were administering to the defenders. An invasion could wait, their turn would come. When it did come, however, it was to be far sooner (18 August) and from a completely different source (the Soviet Union) than might have been expected.

Allied action elsewhere in the Pacific before the first of the atomic bombs was dropped on Hiroshima on 6 August took in action against islands, such as Truk and Wake, which had been robbed of their former prominence. By mid-1945 the Japanese defenders on both of these former bases were left as isolated pockets of resistance and ones that remained utterly bereft of making any impact on a war that had passed them by. The Allies resorted to a combination of carrier raids and offshore shelling of both of these islands for much the same reasons as those advanced against the Kuriles – it reminded the Japanese of how much their stock had fallen and who now held the ascendancy in this ocean.

An illustration of just how dominant the Americans had become in this vast theatre was vividly shown on 21-22 July when a US task group of fifteen tankers, five transports and four freighters carried out the replenishment of both TF 38 and units of the British TF 37 whilst they remained on station providing them with roughly 60,000 tons of oil, 6,369 tons of ammunition, 1,635 tons of supplies, ninety-nine aircraft and 412 reservists, in what became the largest supply operation of the entire war at sea. This impressive logistical exercise was arranged primarily to keep the two fleets operational and in a position to launch a further series of attacks on Japan in the next few days. On 24 July, for instance, their carrier aircraft conducted 1,747 sorties along the shoreline of the Inland Sea attacking major naval bases such as Kobe and Kure. In these raids a significant amount of damage was done to the infrastructure of the ports and the warships that were caught at anchor in these harbours. By the time that the last Allied planes had wheeled away and headed back towards their carriers, the bases were littered with the wrecks of the fleet carrier Amagi, the three battleships Haruna, Hyuga and Ise, the heavy cruiser Aoba, the light cruiser Oyodo, and the training cruiser Iwate, along with over 22,000 tons of merchant vessels and auxiliary ships which had either been sunk directly or had become so badly holed and waterlogged that they had ended up by slithering to the harbour floor. In addition, bombs had struck a trio of carriers (Hosho, Katsuragi and Ryuho), the escort carrier Kaiyo, the light cruiser Kitakami, a destroyer, three escort destroyers, two corvettes, a target ship and a landing craft. These raids demonstrated most graphically that there was no longer any hiding place for naval vessels in Japan. Further raids on 28 and 30 July reinforced that impression by finishing off the heavy cruiser Tone, the training cruiser Izumo, as well as the escort destroyer Nashi, the large, but uncompleted, submarine I-404 and eight other assorted ships, while badly damaging ten other warships including a submarine, a frigate and five corvettes. Apart from deploying carrier planes to assist their Allies in the bombing of Japanese naval targets, the British also sent their battleship King George V and three destroyers to join forces with Rear-Admiral John Shafroth’s task group (TG 34.8) for a night’s bombardment of aircraft and other military related factories situated close to Hamamatsu in the southern part of Honshu-(29-30 July).

At the same time they were also planning another surprise for the Japanese in Singaporean waters. Two midget submarines, XE 1 and XE 3, were towed by the submarines Spark and Stygian into position off the island. They then left their mother ships and entered Keppel Harbour alone on 30 July with the intention of destroying the two Japanese heavy cruisers Myoko and Takao stationed there with explosive charges. They achieved only 50% of their objective with Takao being holed and sunk, while Myoko escaped unharmed.