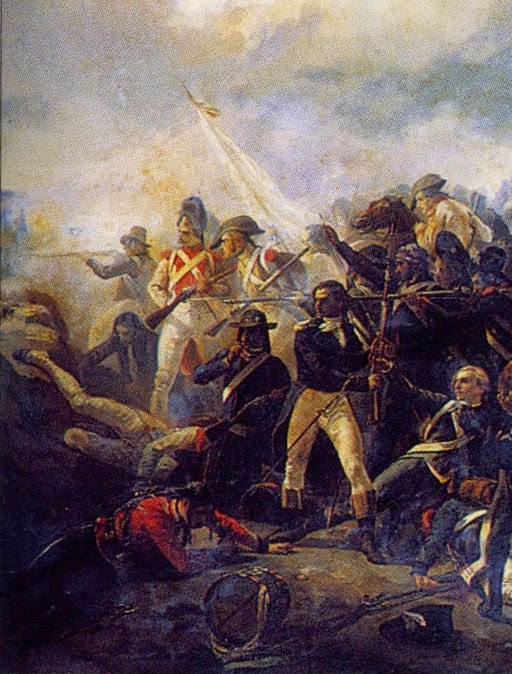 Armée des Émigrés at the Battle of Quiberon.

The émigré armies of the French Revolutionary Wars were armies raised outside of France by and out of Royalist émigrés, with the aim of overthrowing the French Revolution, reconquering France and restoring the monarchy. These were aided by royalist armies within France itself, such as the Chouans, and by allied countries such as Great Britain, and fought (for example) at the sieges of Lyon and Toulon.
They were formed from:
* noblemen volunteers, either descendents of the ancient royal family or not, who had fled France
* troops raised by these nobles through subsidies from other European monarchies, or through their own means
* units of the French army which had also emigrated, such as the 4e régiment de hussards

Even Napoleon said of them “True, they are paid by our enemies, but they were or should have been bound to the cause of their King. France gave death to their action, and tears to their courage. All devotion is heroic.

The Revolutionary and Napoleonic era was a time of massive personal displacement when, as a result of war and upheaval, soldiers marched toward and civilians fled from zones of conflict. Many individuals left France altogether during the 1790s, in successive waves that became a tide of emigration. The émigrés, as they were known, probably numbered some 100,000 in total, though precise figures are difficult to obtain since the official records both omitted genuine cases and included those who had left their homes but remained in the country. Unlike loyalists fleeing the earlier American Revolution, for instance, most émigrés would eventually return to France within a decade, but their departure and subsequent fate was a significant factor in French politics for far longer.

The first émigrés were aristocrats, notably members of the royal household such as the comte de Provence and the comte d’Artois (the future kings Louis XVIII and Charles X), who quit France in disgust as early as 1789 and were the last to return. Military officers left in droves in 1791 and 1792, as the monarchy was menaced and radical change threatened their livelihoods. Such émigrés stripped the army and navy of their leadership and posed a counterrevolutionary threat to the new order, since many of them plotted its overthrow from abroad. Thousands of priests were also leaving France, as a consequence of reform and schism in the Catholic Church. Their opposition to the Revolution fanned the flames of anticlericalism and brought deportation in its wake. War and civil war in 1793 produced a fresh exodus of involuntary émigrés. Emigration was a matter of necessity rather than choice for the 20,000 inhabitants who escaped, in order to avoid arrest for collaboration, after an Austrian army of occupation evacuated Alsace. Likewise in rebel areas of the west and the Midi: Thousands fled from Toulon after the collapse of revolt rather than endure republican reprisals. The frontier areas of France were most deeply affected by this huge surge of fugitives, both on account of turbulence and on account of their proximity to foreign havens. There was a final flurry of departures under the Directory, when priests and moderates fled a renewed government crackdown in 1797, but the émigrés had begun to return.

Although the Terror claimed the majority of its victims among ordinary people, the emigration involved peasants and artisans as well as the privileged classes. Yet nobles and priests were significantly overrepresented: Roughly 17 percent of recorded émigrés were aristocratic, while an even greater percentage, 25 percent, were clergy (Greer 1951, 127). These categories accounted for almost half the émigrés who have been identified. They left earlier and spent longer in exile than their lower-class counterparts. The aristocratic experience, often vividly conveyed in colorful memoirs such as those of the marquise de la Tour du Pin, has inevitably influenced perceptions of the emigration, painting a picture of genteel poverty and efforts to re-create a courtly life abroad. Many nobles gathered in the Rhineland around Coblenz (Koblenz) or in Baden, forming armies that participated in the invasion of France in 1792. Following the French victory at Valmy, the émigrés’ main force was disbanded, but Louis-Joseph de Bourbon, prince de Condé continued the struggle. The gradual expansion of the French Republic and later the Empire into the German and Italian territories where they had first sought refuge dispersed these émigrés more widely, with Britain a popular and secure destination (as it always had been for Breton and Norman refugees). Provence and Artois arrived there after a continental odyssey, while others traveled to Russia or the United States (where they encountered émigrés of another sort, those who were fleeing slave rebellion in the French colony of St. Domingue (later established as Haiti).

The penalties imposed on emigrants had become increasingly severe as the Revolution progressed. In December 1790 the loss of public office was the price to be paid for continued absence, but a year later the Legislative Assembly ordered capital punishment in the event of unauthorized return. After the outbreak of war in 1792 émigré property was seized by the local authorities and it was later put up for sale as national property (biens nationaux). The end of the Terror brought little respite, and émigrés arrested on French soil still faced punishment, while the relatives of émigrés were barred from holding public office. The 700 émigrés comprising the ill-fated invasion force that landed at Quiberon Bay in July 1795 were simply shot, while priests and other returning exiles were executed following the purge of parliament in 1797. Yet steps to address the problem of reintegrating the émigrés had been taken, albeit in a halting fashion. Recognizing that in 1793 many people took flight because of fear of repression rather than because of opposition to the Revolution, a partial amnesty was offered (of which others took advantage).

When Bonaparte came to power in 1799, he initially forbade the return of returning émigrés because they had abandoned their country and did not deserve to be allowed back. Yet from 1800 onward exceptions multiplied, and by 1802 only those who had led military operations against the Republic, served in princely households, or committed treason remained proscribed. Like the royalist vicomte François-Renéde Chateaubriand, émigrés banned from France for a decade rushed to make their declarations of loyalty to the Consulate. Many recovered property that was unsold or had been acquired by agents; the loss to the nobility in general was not as severe as once thought. Only a small, hard-core group of émigrés, some 1,000 in number, were excluded from the general amnesty and stayed abroad until the reestablishment of the Bourbon monarchy in 1814. Yet they were to play a notorious role in souring the Restoration, demanding compensation that climaxed in the infamous milliard des émigrés of 1825, which indemnified those expropriated during the Revolution to the tune of more than 600 million francs. Napoleon may have virtually closed the circle of emigration, but its psychological legacy, like that of the Terror, far outlived its more immediate consequences.