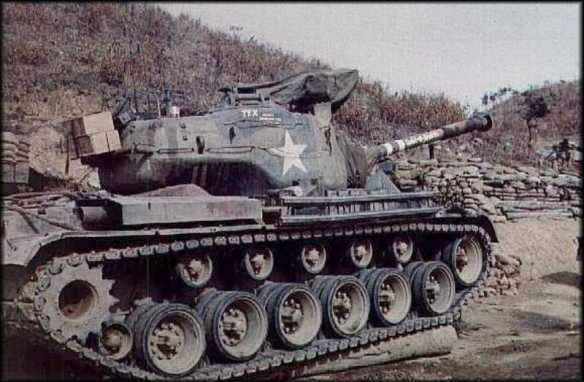 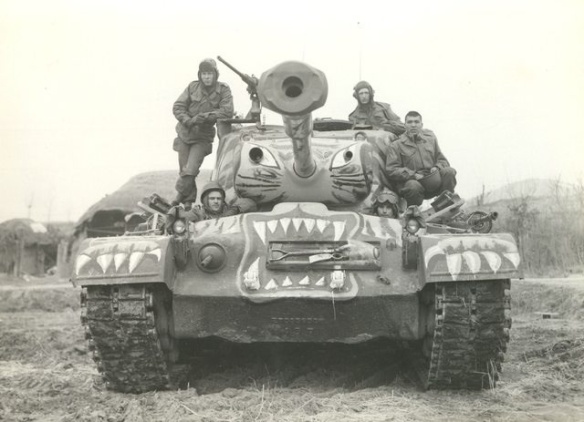 A study conducted after the war counted 119 tank-vs-tank actions during the war, 104 involving US Army tank units and 15 involving the Marine 1st Tank Bn. The M26 and M46 were involved in nearly half of these, the M26 in 38 actions (32%), and the M46 in 12 actions (10%). Only 24 of these 119 engagements involved more than three North Korean tanks and most were small-scale encounters of platoon size or less. The relatively small number of tank-vs-tank battles of the M46 was due to the fact that none saw combat until early September. A total of 34 US tanks were knocked out by North Korean armor, including 6 M26 and 8 M46 tanks, of which only 15 were totally lost. The US tanks knocked out 97 T-34/85 tanks and claimed a further 18 as probables. The M26 was credited with 39% of the NKPA tank losses and the M46 with 12%. About half of the engagements took place at ranges of 350 yds or less, and at this distance the M26 had a hit probability of 85%, somewhat higher when firing HVAP and somewhat lower when firing APC ammunition. About 20% of the engagements took place at 350-750 yds, and a similar number at 750-1,150 yds. Hit probabilities at these ranges were 69% and 46% respectively. These figures are comparable to the M46 and M4A3E8 Medium tanks, since at the time all US tanks had similar fire control systems. The shortest engagement range was 10 yards, and the longest known successful engagement by and M26 is 3,000 yards.

The Sherman was most effective when enemy tanks were absent.

Initially the NKPA had one armoured regiment and one independent tank battalion, for a total of 150 tanks. About half were lost within 45 days of the beginning of the offensive. The depleted units were re-equipped with a further 80-100 (sources vary) T-34s.

Divisional tank battalions in Korea varied in their allocation of tanks. The early arriving divisions had a mix of M4s and M26s. They usually had all M26s by 1951 and by 1952 had M46s. One battalion, the 2d ID’s, though went to pure M4s in early 1952 as the commander preferred it. It later received M46s (new commander).

Clay Blair discusses this in some detail in THE FORGOTTEN WAR: AMERICA IN KOREA. By 1951, the M26’s were purged from the Army’s tank battalions in Korea. Throughout the rest of the war three tank battalions — the 6th, 64th and 73d — were equipped with M46 Pattons, and the three other tank battalions — the 70th, 72d and 89th — kept their Shermans, most of which were Easy Eights. As Gordo mentioned below, the regimental tank companies in the 2d, 3d and 7th ID’s had Easy Eights.

According to Blair, some tankers swore by the Pattons, but others thought it was too big and clumsy for the Korean landscape, burned too much fuel, and were maintenance intensive. Bill Rogers who commanded the 70th Tank Battalion in 1950, and later became the Eighth Army armor officer in 1951, preferred the Easy Eights as well.