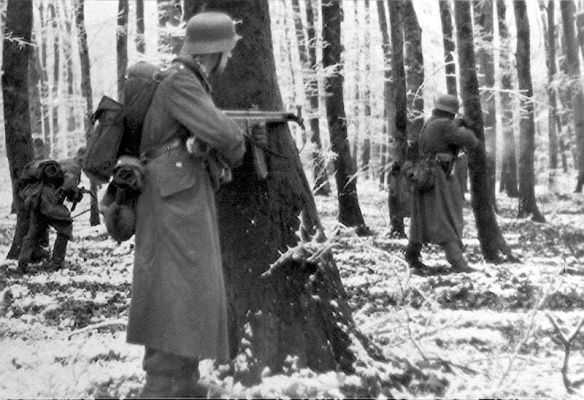 One of the key battles of World War II in Europe, the so-called Battle of the Bulge was the final Ger man offensive of the war and came as a great surprise to the Allies, who widely assumed that the German armies had been beaten to the point that they were incapable of any offensive action. In sum, the battle began on December 16, 1944, when 25 German divisions attacked a thinly held portion of the Allied lines in the Belgian Ardennes Forest. Initially, the attack broke through the five green or recuperating U.S. divisions that had been assigned to what was considered a quiet sector, and the battle took its popular name from the bulge, or salient, the Germans achieved by penetrating nearly as far west as the Meuse River. The German plan was to cross the Meuse and divide Allied forces by penetrating all the way to Antwerp, Netherlands, the Allies’ principal supply port. When Allied high command recognized the danger posed by the surprise offensive, reinforcements were rushed to the area, and the U.S. 101st Airborne and U.S. 10th Armored Division were ordered to hold Bastogne, completely encircled by the Germans, at all costs, until the main body of reinforcements could arrive. In bitter winter action, Bastogne was held, and elements of the U.S. First and Third Armies, supported by heavy British and U.S. air support (initially delayed by bad weather), managed to turn a potential Allied catastrophe into a decisive German defeat, after which, for the rest of the war, German forces were continually on the defensive and continually in retreat. It was the largest single battle fought by U.S. troops in Europe.

Some military historians look upon the Ardennes offensive as evidence of Adolf Hitler’s heedless desperation in the closing phase of the war. There is a certain merit in this view, but the offensive was also a brilliantly staged, bold, violent, and ruthless thrust, which came remarkably close to achieving its objective of splitting the Allied lines and capturing the Allies’ most important supply port. Hitler’s generals made highly effective use of the element of surprise and, even more, of the weather. By attacking during a prolonged winter storm, they ensured that the Allies’ overwhelmingly superior air power would be useless, at least in the important early stages of the offensive. It is unclear whether Hitler actually imagined that victory in this battle would reverse the course of his defeat. However, he had rational reason to hope that such a victory would so dispirit the Allies that they would negotiate a peace rather than demand unconditional surrender.

For purposes of this offensive, Hitler created the Sixth SS Panzer Army, consisting of four Panzer divisions under the command of Josef A. “Sepp” Dietrich, an SS officer both fierce and trusted. From the northern Ardennes in the vicinity of Monschau, Dietrich would lead the Schwerpunkt (principal thrust) of a classic Blitzkrieg offensive. Supplementing this principal thrust would be another new Panzer force, the Fifth SS Panzer Army, under Hasso-Eccard von Manteuffel, assigned to attack in the center, and, in the south, the Seventh Army, under Lt. Gen. Erich Brandenberger. In all, German strength amounted to 30 divisions with grossly inadequate air support— about 1,000 fighters—from the badly depleted Luftwaffe (Brig. Gen. Dietrich Peltz’s 2nd Fighter Corps).

As the Allies had deceived Hitler before and during the Normandy landings (D-day), so Hitler and his commanders prepared their massive offensive, code named “Wacht am Rhein” (“Watch on the Rhine,” suggesting a defensive operation) in profound and highly effective secrecy, even deceiving and bypassing the German commander in chief, Gerd von Rundstedt. This was understandable, because the realistic Rundstedt would doubtless have tried to veto a plan that seemed ultimately doomed to fail, even if successful in the short term. Even the commander Hitler chose to carry out the operation, Walther Model, thought the offensive too ambitious and suggested a modified operation he considered more feasible. Hitler listened but rejected the proposal out of hand.

The offensive included an airborne assault, which the Germans had not used since the very earliest days of the war, and a special unit, the 150th SS Brigade under Otto Skorzeny, the brilliant special forces commander who had successfully pulled off the rescue of overthrown Italian dictator Benito Mussolini. The paratroops were to secure and hold key Meuse bridges in order to facilitate the German advance after it had broken through the Allied lines, and Skorzeny’s command, which included English-speaking troops dressed in American uniforms and driving American vehicles, was to infiltrate and disrupt the American rear area. Unfortunately for the Germans, the airborne drops were poorly executed, the troops landing too widely dispersed to carry out their mission against the bridges. While Skorzeny’s forces did cause significant confusion, they achieved little of tactical significance, and soldiers captured in American uniforms were summarily executed. Nevertheless, the very tip of Dietrich’s 1st SS Panzer Division, Col. Joachim Peiper’s armored Kampfgruppe, made an early lightning thrust deep into American-held territory, through Malmédy, Belgium, west of which it was finally destroyed.

As Hitler took advantage of the weather, so he exploited Allied weakness in the Ardennes sector. U.S. Lt. Gen. Courtney Hodges, in command of the First Army (part of the Twelfth Army Group commanded by Gen. Omar Bradley), had responsibility for Ardennes, but, acting in accordance with Bradley’s instructions and those of higher Allied command, concentrated on the Aachen area with the object of capturing the vital Roer dams. The 80-mile Ardennes front was regarded as a quiet sector, which could be adequately defended by battle-weary units in need of rest and recuperation and by green units, which could benefit from gradual exposure to the line. In place at the time of the initial attack were the 99th and 106th Divisions from the First Army’s V Corps, and the 28th and 4th Divisions from VIII Corps. The 9th Armored Division was held in reserve. Hodges and his superiors believed that careful intelligence would provide warning of any highly unlikely build-up of German forces in the area, affording sufficient time to reinforce the position, if necessary. However, the Germans were carrying out their build-up in such secrecy, amid absolute radio silence and under cover of weather that grounded Allied aerial reconnaissance, that neither Hodges, nor Bradley, nor British general Sir Bernard Law Montgomery, overall commander of Allied ground forces, were aware of the gathering danger. The only clue came from Ultra intercepts and decrypts, which revealed a build-up, but which the Allied commanders dismissed as a build-up being assembled to counter the next Allied offensive.

The attack, then, at 5:30 on the morning of December 16, came as a complete surprise. Worse, because German artillery had knocked out telephone lines, word of the attack reached Bradley’s headquarters only after much delay and, even then, was misinterpreted as merely a local attack. Bradley’s conclusions was overruled by the judgment of Supreme Allied Commander Dwight D. Eisenhower, who ordered the 10th Armored Division of George S. Patton’s Third U.S. Army and the 7th Armored Division of the Ninth U.S. Army to reinforce the Ardennes line. This enabled the beleaguered 99th Division, reinforced by the 1st, 2nd, and 9th, to hold out against the attack in the north, while the 4th held the line against Brandenberger in the south. But between these, in the center, which had been hit hardest, resistance by the U.S. 28th and 106th Divisions collapsed. Two regiments of the 106th were captured, and a third division, reinforced by the 7th Armored Division, held St. Vith until December 22, when these units were ordered to withdraw to a position behind the Salm River. Despite this withdrawal, Allied high command deemed the village of Bastogne, with its important crossroads, too important to lose. The 101st Airborne and the 10th Armored Division were ordered to hold it, even as Manteuffel encircled it. Throughout the rest of the Ardennes offensive, Bastogne would form an Allied enclave within newly acquired German territory.

In the meantime, Ultra decrypts persuaded Eisenhower that the German objective was the Meuse. On December 19, accordingly, Eisenhower suspended the general Allied offensive and ordered Patton to turn his entire Third Army from its ongoing westward advance 90° to the north. His mission was to counterattack—massively—in the Ardennes. The speed and efficiency with which Patton carried out this change in direction was one of the most remarkable tactical achievements of the entire war, and it spelled the beginning of the end of the German offensive. Patton would not only relieve the encircled 101st Airborne and 10th Armored Division, he would enable Hodges to realign his First U.S. Army and thereby transform his posture from one of defense to counterattack.

Dietrich’s advance in the north was thwarted, but Manteuffel, in the central position, continued to drive on. Hitler gave permission to transfer the bulk of the attack to support Manteuffel, who reached the village of Foy-Notre Dame, a mere three miles east of the Meuse, on December 24. However, by December 22, the weather improved, allowing the Allies to call in air support, which they did—massively—flying 1,300 sorties on December 23 and some 2,000 on December 24. The effect was devastating on German supply lines, which had already been stretched to the breaking point. The Luftwaffe launched a truly desperate raid on Allied airfields on January 1, managing to destroy some 156 Allied aircraft, but at a staggering loss of more than 300 of its own craft. Already reeling, the Luftwaffe was now neutralized as an effective force in the war.

Manteuffel’s advance to Foy-Notre Dame marked the farthest extent of the German “bulge.” Pounded by Hodges from the north and drained by the continued resistance of encircled Bastogne, Manteuffel stalled. On January 3, Hodges’s VII Corps attacked southward against Manteuffel, intending to crush him in a pincer action, of which Patton’s Third Army formed the northward thrust. Once again, however, the weather intervened, bringing heavy snows that slowed the advance of both American armies, and it was not until January 16 that Hodges and Patton converged on Houffalize, by which time Manteuffel had withdrawn. Thus, an opportunity to destroy outright most of the German units committed to the offensive was lost. Nevertheless, the Americans inflicted some 100,000 casualties against an attacking force of 500,000, suffering, in turn, casualties almost as heavy. Yet there was no doubt as to the victor. The last German offensive had been crushed, and whereas the Americans could make up their losses, the Germans could not. Hitler’s gamble at the Ardennes had spent much of his irreplaceable last combat-worthy reserves and had exposed his Luftwaffe, already in extremity, to a blow that effectively destroyed it.