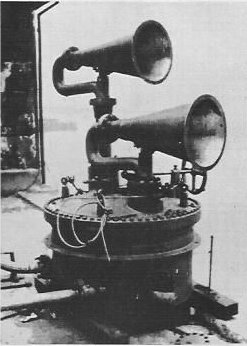 Japanese surface units were being equipped during these years with 1.5 m mark 2 model 1 air warning, a dipole array following the design of the land-based set, mark 1 model 1, and as such was similar to the general principles of Freya and SCR-270, although of shorter range. These installations were not notably successful, owing to their not being sturdy enough for use aboard warships. The set mounted on the 18 inch gun battleship Musashi suffered broken antenna insulators and the failure of transmitter tubes when the vessel underwent firing practice off Katsuru Island in September 1942, which naturally enough sent criticism to the Naval Technical Research Department (NTRD).

The 10 cm mark 2 model 2 had characteristics that distinguished it from Allied microwave equipment. It used a low-power magnetron instead of a klystron as local oscillator, the anode of which had nearly the same arrangement of holes as the main oscillator but was made of thin metal that could be deformed; this allowed the frequency to be altered just enough to hold the intermediate frequency of the heterodyne receiver constant. The waveguides used in all Japanese sets were circular; transmission and reception were in separate horns; parabolic reflectors were not used.

This unit had made a good name for radar in the Imperial Navy. As a result of the insistence of Commander Yoshio Sakura, the earnest Communications Officer of the Chief of Staff, First Fleet, an experimental model of mark 2 model 2 had been installed in the cruiser Atago while she was undergoing repairs for injuries received in action off Guadalcanal in November 1942. This radar had been of great use during an attempt by seven cruisers to disrupt the November 1943 Allied landings at Empress Augusta Bay on Bougainville. The cruisers had been driven away by aircraft, but the Atago’s well-trained radar crew had allowed them to thread their way unscathed out of the extremely hostile zone.

The strains of production and development caused reorganization at the NTRD. The Electric Wave Research Department became its largest element and the one with the largest share of troubles. Having only begun the first serious radar work in 1941 this group now had to compete with an enemy that had begun in 1935. The Imperial Navy’s concern is reflected in the placement of Vice Admiral Takeshi Nawa as NTRD chief in mid1943. His appointment resulted in part from dissatisfaction in the way Ito conducted the more practical aspects of radar, and Nawa made an extensive reorganization. He faced the problem of keeping design up to the latest requirements and production adequate for a huge demand as well as training operation and maintenance personnel. It was a substantial order.

The new organization did not produce the results desired, and the Navy Minister created in March 1944 the Electronics Development Department to assume responsibility for all research and testing of radar, communications and sonar equipment. This move was strongly opposed by the units affected, their argument being that slow progress had come from the lack of qualified personnel and material, not from organizational defect. The new department still controlled the same operating laboratories as before; the absence of noticeable progress would bring another, equally futile change the following year.

Matters were not helped by the attitudes of the authorities. Shigeru Nakajima was responsible for microwave development at Japan Radio where the cavity magnetrons had been invented in cooperation with NTRD. At the beginning of the war his staff numbered 800 engineers but was progressively reduced by inductions into the services to half that by the end.

Knowledge of the Metox receiver arrived in Japan aboard the German U-511 in August 1942, and more than 2000 of them were soon distributed within the fleet. Inasmuch as they did not respond to microwaves, the same deficiency that soon proved so troublesome in the Bay of Biscay, they were of no more use against the ever increasing numbers of SGs than the U-boat sets were against ASV mark III and quickly lost favor.

In February 1944 the Americans learned that the Japanese twin-engine Betties had radar, the 2 m mark 6 model 2 (known in prototype as the H-6), with a Yagi antenna on the nose and horizontal dipoles on each flank of the fuselage. This general search set was developed at the Naval Air Technical Depot at Oppama to a great degree independently of NTRD. It had a peak power of 2 kW and weighed 60 kg. The Depot also produced the 60 cm FD-2 for night fighters having a peak power of 2.5 kW and weighing 70 kg. There is little evidence of the employment of FD-2.

It is much more difficult for countermeasures people to identify airborne radar. A ground radar station remains fixed while its wavelength, pulse width and repetition rate are studied, but an airborne set is quickly gone. The usual method is for a Ferret to fly as bait and, if attacked, use the advance warning to evade destruction. Hunting for Japanese airborne radar occupied numerous Ferret flights in late 1943, precipitated by reports of night attacks of mysterious origin, but no Japanese planes were so detected. The first information about the mark 6 model 2 mounted on Betties, which was ill suited for use as an interceptor, came from the same source that disclosed the existence of the 10 cm mark 2 model 2, a large number of documents captured in February 1944 on Kwajalein Atoll in the Marshalls.

Japanese radar suffered seriously from a shortage of most important electronic components and of the outstandingly poor quality of much of what could be obtained. To meet the increased demands vacuum-tube manufacture had to be subcontracted to small companies with little experience and with unsatisfactory results. Nickel was so short that coins of that composition were bought pretty much to extinction and recast. In August 1943 the two services were so alarmed at the shortage of materials that they set aside their grudges and formed the Army-Navy Radio Technology Committee (Riku-Kaigun Denpa Gijutsu Iin Kai) made up of Professor Hidetsugu Yagi of Osaka University, Professor Yasushi Watanabe of Tokyo Imperial University and Professor Hantaro Nagaoka of the Institute of Physical and Chemical Research.

The carrier raids that had preceded the Battles of the Coral Sea and Midway had left a strong and very positive impression on nearly all members of the Pacific command. They had kept the enemy guessing, had kept the precious carriers away from prying eyes and had provided an unparalleled form of training for well-schooled but green fliers all possible because of the CXAM at the foremast. So carrier raids became the norm when an invasion or fleet action was not impending. They also served to reduce the aircraft population of the island bases. The process picked up a name in South Sea pidgin of ‘makee learn’.

The element of complete surprise seldom came with these strikes because the islands soon had air-warning radar, but the defenders were still rattled when weeks of quiet duty were shaken by a 20 minute radar warning. One of these and it was on what Americans incorrectly thought to be the Pacific Gibraltar of Truk caught the defenders with most planes on the ground. After the war it was learned that a lonely freighter loaded with radar for Truk had gone down from a torpedo of USS Trout a couple of months earlier. The radar defenses of these bases did not include fighter control, not even for the fortress that Rabaul had become. The reason for this probably lay with Japanese doctrine that was similar to the German of 1940. Furthermore, no radars capable of returning the three-dimensional coordinates needed by controllers were available until 1944. No operational Japanese set had PPI.

One of these raids afforded an unexpected and valuable technical evaluation. A strike on Saipan and Tinian was ordered for Mitscher’s group on 22 February 1944. On the afternoon of the preceding day a snooper had spotted them and got away, so it was obvious that surprise had been lost, and experience had taught them to expect a night torpedo-bomber attack for which the Japanese had demonstrated competence. One of the early 1942 carrier raids had been called off when it was realized that they had been seen, but two years had altered matters. There were night fighters aboard, but Mitscher did not wish to miss the advantages of a dawn attack by reversing course to launch and recover by sailing into the prevailing easterly winds. He decided that night would force the attackers to fly relatively straightforward paths, perfect for his FD radars, directors and guns firing proximity fuzes. He ordered the carriers surrounded by an inner circle of cruisers and an outer circle of destroyers all having the most modern AA weapons. As the enemy aircraft appeared as expected, the fleet maneuvered by order from the knowledge gained by radar to present the most difficult torpedo targets and the guns opened fire. None of the ships suffered damage, and only five of the 20 attackers returned to the home base. The raid proceeded on schedule and accomplished the desired results. This way of dealing with night torpedo bombers became standard. The improvement of AA artillery over that of only three years earlier was startling to an extreme degree.