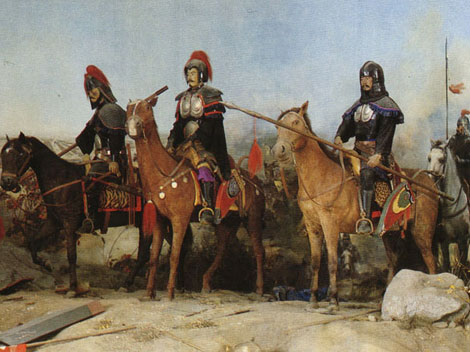 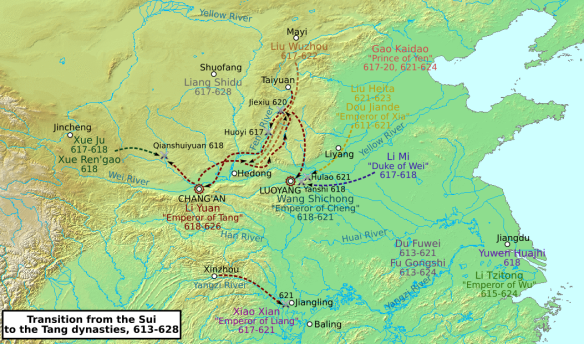 In summer 620, Emperor Gaozu again commissioned Li Shimin against a major enemy—the former Sui general Wang Shichong, who had Sui’s last emperor, Emperor Yang’s grandson Yang Tong, yield the throne to him in 619, establishing a new state of Zheng as its emperor. When Li Shimin arrived at the Zheng capital Luoyang, Wang offered peace, but Li Shimin rebuffed him and put Luoyang under siege. Meanwhile, his subordinates took Zheng cities one by one. By winter 620, most of Zheng territory, other than Luoyang and Xiangyang, defended by Wang Shichong’s nephew Wang Honglie, had submitted to Tang. Wang sought aid Dou Jiande the Prince of Xia, who controlled most of modern Hebei. Dou, reasoning that if Tang were able to destroy Zheng, his own Xia state would be next, agreed. He sent his official Li Dashi to try to persuade Li Shimin to withdraw, but Li Shimin detained Li Dashi and gave no response. Meanwhile, during the campaign, Li Shimin chose some 1,000 elite soldiers, clad in black uniform and black armor, commanded by himself, to serve as advance troops, with Qin, Cheng Zhijie, Yuchi, and Zhai Zhangsun as his assistants.

The Battle of Hulao of 28 May 621, located just east of Luoyang, was a decisive victory for Li Shimin, through which he was able to subdue two warlords, Dou Jiande and Wang Shichong. Li Shimin led a siege on the city of Luoyang, head of the self-declared emperor Wang Shichong, who solicited help from Dou Jiande from the east. However, Dou Jiande delayed and when he finally arrived, Li Shimin brought forces to meet the new threat. Li Shimin’s army avoided conflict until the troops of Dou Jiande were exhausted and then led a cavalry charge, effectively capturing Dou Jiande. Afterwards, Wang Shichong, seeing no other choice, surrendered Luoyang. Dou Jiande was later executed, resulting in some of his followers, led by Liu Heita, raising an unsuccessful rebellion against Tang. At some point 13 Shaolin monks served Li in the siege, quite successfully.

The oldest evidence of Shaolin participation in combat is a stele from 728 that attests to two occasions: a defense of the monastery from bandits around 610 and their role in the defeat of Wang Shichong at the Battle of Hulao in 621.

By spring 621, Luoyang was in desperate situation, and Xia forces had not yet arrived, but Tang troops had also suffered serious casualties, as Luoyang’s defenses, aided by powerful bows and catapults, were holding. Emperor Gaozu, hearing that Dou had decided to come to Wang’s aid, ordered Li Shimin to withdraw, but Li Shimin sent his secretary Feng Deyi to Chang’an to explain to Emperor Gaozu that if he did withdraw, Wang would recover and again be a major threat in the future. Emperor Gaozu agreed and allowed Li Shimin to continue to siege Luoyang. When Xia forward troops arrived first, Li Shimin surprised and defeated them, and then sent Dou a letter suggesting that he withdraw. Dou would not do so, and, against the advice of his wife Empress Cao and secretary general Ling Jing that he should instead attack Tang’s prefectures in modern southern Shanxi, he marched toward Luoyang. Anticipating Dou’s maneuver, Li Shimin left a small detachment, commanded by Li Yuanji, at Luoyang, while marching east himself, taking up position at the strategic Hulao Pass. When the armies engaged at Hulao, Li Shimin defeated Dou and captured him. He took Dou back to Luoyang and displayed him to Wang Shichong. Wang, in fear, considered abandoning Luoyang and fleeing south to Xiangyang, but as his generals pointed out that his only hope was Dou, he surrendered. Xia forces, after initially fleeing back to the Xia capital Ming Prefecture, in modern Handan, Hebei), also surrendered. Zheng and Xia territory were Tang’s. Li Shimin returned to Chang’an in a grand victory procession, and, to reward Li Shimin, Emperor Gaozu awarded both him and Li Yuanji three mints so that they could mint money of their own. He also bestowed on Li Shimin the special title of “Grand General of Heavenly Strategies”, Tiance Shangjiang). Meanwhile, Li Shimin’s staff, already full of generals and strategists, were now being supplemented with a number of literary men.

The former Xia territory did not remain in Tang hands for long, as in winter 621, the Xia general Liu Heita rose against Tang rule, claiming to be avenging Dou, whom Emperor Gaozu had executed after Li Shimin took him back to Chang’an (against the latter’s wishes). He was allied with Xu Yuanlang, a former agrarian rebel general who was nominally under Wang Shichong and who had submitted to Tang after Wang’s defeat. Liu dealt successive defeats to Emperor Gaozu’s cousin Li Shentong the Prince of Huai’an, Li Xiaochang the Prince of Yi’an, and Li Shiji. Emperor Gaozu sent Li Shimin and Li Yuanji against Liu. In 622, after some indecisive battles with Liu, who had by that point taken over almost all of former Xia territory and claimed the title of Prince of Handong, Li Shimin defeated Liu by flooding his army with water from the Ming River, flowing near Ming Prefecture), and Liu fled to Eastern Tujue. Li Shimin then headed east and attacked Xu, defeating him. After leaving Li Shiji, Li Shentong, and Ren Gui to continue to attack Xu, Li Shimin returned to Chang’an.