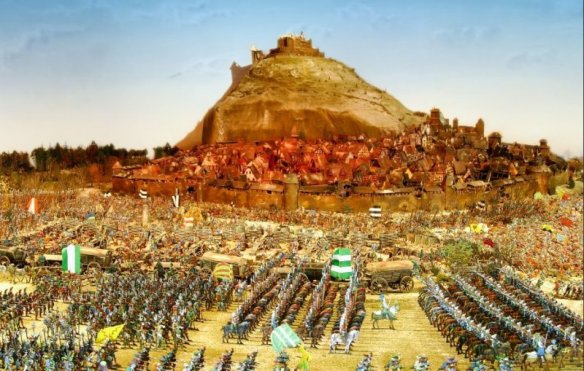 Diorama of the siege of Kulmbach 1553. The battle is recreated in the German Tin Soldiers Museum in Kulmbach. Margrave Albrecht Alcibiades of Brandenburg-Kulmbach (1522-57) had tried to create a Franconian dukedom for himself at the expense of the Franconian prince-bishoprics Würzburg, Bamberg, Eichstätt and the imperial cities Schweinfurt and the rich and powerful Nuremberg. This meant war.

The prince-bishops and Nuremberg allied with the prince elector of Saxony and the duke of Braunschweig and fought against the margrave.

1553 the allied armies could enclose Kulmbach, the residence town of Albrecht Alcibiades and conquer the city. Kulmbach was completely destroyed, all male citizens killed, only the mighty Plassenburg could withstand for another eight months, but then had to capitulate too.

The Second Margrave War (German: Zweiter Markgrafenkrieg) was a conflict in the Holy Roman Empire between 1552 and 1555. Instigated by Albert Alcibiades, Margrave of Brandenburg-Kulmbach and Brandenburg-Bayreuth, it involved numerous raids, plunderings and the destruction of many towns and castles in the empire, especially in Franconia. Other towns in other areas where also affected, such as Mainz, Worms, Oppenheim, Metz, Verdun, Frankfurt, and Speyer.

9 July 1553: Battle of Sievershausen; Maurice, Elector of Saxony and Henry V, Duke of Brunswick-Lüneburg defeat Albert Alcibiades; Maurice is killed in the battle and Henry loses his two sons

1553: The city of Hof was successfully besieged by the opponents of Margrave Albert II Alcibiades.

26 November 1553: Capture and destruction of Kulmbach, Albert’s residence, by troops from Brunswick-Lüneburg, Bohemia, Bamberg, Nuremberg, Würzburg and other areas of the Empire. Siege of Plassenburg Castle

June 1554: Albert defeated in the Battle of Schwarzach

July 1554: Plassenburg Castle is handed over to the opposing forces