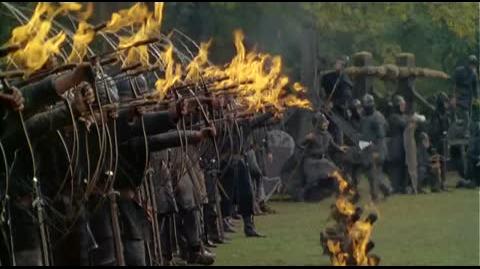 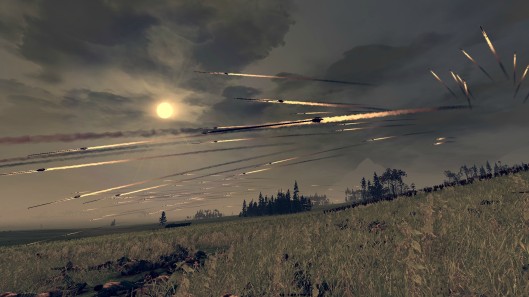 The first incendiary missiles were arrows wrapped with flammable plant fibers (flax, hemp, or straw, often referred to as tow) and set afire. Burning arrows of these materials could be very effective in destroying wooden walls from a safe distance. Indeed, Athens was captured by flaming hemp arrows in 480 BC, when the Persians invaded Greece. Xerxes had already destroyed many Greek cities with fire and, as the grand Persian army approached Athens, the populace was evacuated to the countryside. A few priests and poor and infirm citizens were left behind to defend the Acropolis. These defenders put up barricades of planks and timber around the Temple of Athena and managed to hold off the Persians for a time by rolling boulders down the slopes of the Acropolis. But, in the first recorded use of fire projectiles on Greek soil, the Persians shot fiery arrows to burn down the wooden barricades. The Persians then swarmed over the Acropolis, slaughtering all the Athenians in the temple and burning everything to the ground.

But simple flaming missiles of straw were “insufficiently destructive and murderous” to satisfy ancient strategists for long, notes Alfred Crosby. They were not much use against stone walls, and ordinary fires could be doused with water. “What was wanted was something that would burn fiercely, adhere stubbornly, and resist being put out by water.” What kinds of chemical additives would produce fires strong enough to burn walls and machines, capture cities, and destroy enemies?

The first additive was a plant chemical, pitch, the flammable resin tapped from pine trees. Later, distillations of pitch into crude turpentine were available. Resinous fires burned hotly and the sticky sap resisted water. Arrows could be dipped in pitch and ignited, or one could set fires fueled with pitch to burn the enemy’s equipment. Other mineral accelerants for making hotter and more combustible weapons were discovered, too.

The earliest evidence that flaming arrows were used by a Greek army appears in Thucydides’ History of the Peloponnesian War. In 429 BC, the Spartans besieged the city of Plataia, an ally of Athens, and used a full panoply of siege techniques against the stubborn Plataians. We know the Spartans used fire arrows, because the Plataians protected their wooden palisades with what would later become the standard defense against flaming projectiles—they hung curtains of untanned animal skins over the walls. Then, the Plataians lassoed the Spartans’ siege engines, winching them into the air and letting them crash to the ground. With their machines smashed and with their archers unable to ignite the rawhide-covered walls, the Spartans advanced beyond mere flaming arrows, into the as-yet-unexplored world of chemical fuels. This event occurred just two years after Euripides’ play about Medea’s mysterious recipe for “unnatural fire.”

The Spartans heaped up a massive mound of firewood right next to the city wall. Then they added liberal quantities of pine-tree sap and, in a bold innovation, sulphur. Sulphur is the chemical element found in acrid-smelling, yellow, green and white mineral deposits in volcanic areas, around hot springs, and in limestone and gypsum matrix. Sulphur was also called brimstone, which means “burning stone.” Volcanic eruptions were observed to create flowing rivers and lakes of burning sulphur, scenes that corresponded to ancient visions of Hell with its lakes of fire. In antiquity, clods and liquid forms of sulphur had many uses, from medicine and pesticides to bleaching togas. Sulphur’s highly flammable nature also made it a very attractive incendiary in war. “No other substance is more easily ignited,” wrote Pliny, “which shows that sulphur contains a powerful abundance of fire.”

When the Spartans ignited the great woodpile at Plataia, the combination of pitch and sulphur “produced such a conflagration as had never been seen before, greater than any fire produced by human agency,” declared Thucydides. Indeed, the blue sulphur flames and the acrid stench must have been sensational, and the fumes also would have been quite destructive, since the combustion of sulphur creates toxic sulphur dioxide gas, which can kill if inhaled in large enough quantities. The Plataians abandoned their posts on the burning palisades. Much of the wall was destroyed, but then the wind reversed and the great fire eventually subsided after a severe thunderstorm. Plataia was saved by what must have seemed to be divine intervention against the Spartans’ technological innovation. Notably, this also happens to be the earliest recorded use of a chemically enhanced incendiary that created a poison gas, although it is not clear that the Spartans were aware of that deadly side effect when they threw sulphur on the flames.

Defenders quickly learned to use chemically fed fires against besiegers. Writing in about 360 BC, Aeneas the Tactician’s book on how to survive sieges devoted a section to fires supplemented with chemicals. He recommended pouring pitch down on the enemy soldiers or onto their siege machines, followed by bunches of hemp and lumps of sulphur, which would stick to the coating of pitch. Then, one used ropes to immediately let down burning bundles of kindling to ignite the pitch and sulphur. Aeneas also described a kind of spiked wooden “bomb” filled with blazing material that could be dropped onto siege engines. The iron spikes would embed the device into the wooden frame of the machine and both would be consumed by flames. Another defense strategy was to simply “fill bags with pitch, sulphur, tow, powdered frankincense gum, pine shavings, and sawdust.” Set afire, these sacks could be hurled from the walls to burn the men below.

During the grueling year-long siege of the island of Rhodes by Demetrius Poliorcetes (“The Besieger”) in 304 BC, both sides hurled resinous missiles—firepots and flaming arrows. On moonless nights during the siege, wrote Diodorus of Sicily, “the fire-missiles burned bright as they hurtled violently through the air.” The morning after a particularly spectacular night attack, Demetrius Poliorcetes had his men collect and count the fire missiles. He was startled by the vast resources of the city. In a single night, the Rhodians had fired more than eight hundred fiery projectiles of various sizes, and fifteen hundred catapult bolts. Rhodes’ resistance was successful, and Poliorcetes withdrew with his reputation tarnished, abandoning his valuable siege equipment. From the sale of his machines, the Rhodians financed the building of the Colossus of Rhodes astride their harbor, one of the Seven Wonders of the Ancient World.

Technological advances in fire arrows were reported by the Roman historians Silius Italicus and Tacitus, who describe the large fire-bolt (the falarica), a machine-fired spear with a long iron tip that had been dipped in burning pitch and sulphur. (The opening scene of the 2000 Hollywood film “Gladiator” showed the Roman falarica in action in a night battle in Germany). The burning spears were “like thunderbolts, cleaving the air like meteors,” wrote Silius Italicus. The carnage was appalling. The battlefield was strewn with “severed, smoking limbs” carried through the air by the bolts, and “men and their weapons were buried under the blazing ruins of the siege towers.”

Machine-fired fire-bolts and catapulted firepots of sulphur and bitumen were used to defend Aquileia (northeastern Italy) when that city managed to hold off the long siege by the hated emperor Maximinus in AD 236 (his own demoralized soldiers slew him in his tent outside the city walls). Later, incendiary mixtures were packed inside the hollow wooden shafts of the bolts. Vegetius, a military engineer of AD 390, gives one recipe for the ammunition: sulphur, resin, tar, and hemp soaked in oil.

Ammianus Marcellinus (fourth century AD) described fire-darts shot from bows. Hollow cane shafts were skillfully reinforced with iron and punctured with many small holes on the underside (to provide oxygen for combustion). The cavity was filled with bituminous materials. (In antiquity, bitumen was a catchall term for petroleum products such as asphalt, tar, naphtha, and natural gas.) These fire-darts had to be shot with a weak bow, however, since high velocity could extinguish the fire in the shaft. Once they hit their target, the fire was ferocious. They flared up upon contact with water, marveled Ammianus, and the flames could only be put out by depriving the blaze of oxygen, by smothering it with sand.

The fire-dart sounds similar to the Chinese fire-lance, invented in about AD 900. This was a bamboo (later, metal) tube with one opening, packed with sulphur, charcoal, and small amounts of the “fire chemical” (explosive saltpeter or nitrate salts, a key ingredient of gunpowder). The tube was affixed to a lance with a kind of pump, which Crosby describes as “a sort of five-minute flame thrower.” At first, they “spewed nothing but flame,” but soon the Chinese added sand and other irritants like sharp shards of pottery and metal shrapnel, and many different kinds of poisons, such as toxic plants, arsenic, and excrement, to the saltpeter mixture. As Robert Temple, historian of ancient Chinese science, remarked, “Bizarre and terrible poisons were mixed together” to make bombs and grenades. “Practically every animal, plant, and mineral poison imaginable was combined,” for “there hardly seemed to be a deadly substance unknown to them.”

In India, a military manual by Shukra, the Nitishastra (dated to the beginning of the Christian era) describes tubular projectiles thrown by devices used by the infantry and cavalry. The tube, about three feet long, contained saltpeter, sulphur, and charcoal, with other optional ingredients, such as iron filings, lead, and realgar (arsenic). The tubes shot iron or lead balls by “the touch of fire” ignited “by the pressure of flint.” Shukra remarked that “war with [these] mechanical instruments leads to great destruction.”