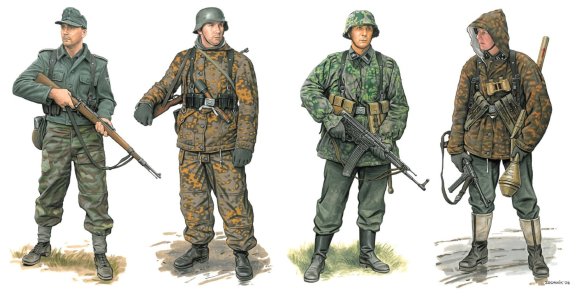 But what the regime increasingly required was a military force that fought out of fanatical National Socialist commitment. This was in fact available, in the shape of the Military SS (Waffen-SS). Its history went back to the early days of the Third Reich, when Hitler had formed an armed personal bodyguard, which later became the so-called ‘Adolf Hitler Personal Flag’ (Leibstandarte Adolf Hitler). Conceived mainly as a ceremonial unit, it was commanded by a rough Bavarian Nazi, Josef (‘Sepp’) Dietrich, whose previous jobs had included working as a petrol-pump attendant, a waiter, a farm labourer and a foreman in a tobacco factory. Born in 1892, he had served in a tank unit, but otherwise had no serious military experience, as army generals repeatedly but vainly pointed out. Soon, however, Dietrich’s boss Heinrich Himmler set up another, larger organization and began recruiting army men to provide the unit with proper military training, which from 1938 was provided to Dietrich’s men as well. By the end of 1939, these various military units of the SS had been joined by groups from the Death’s Head Units formed by Theodor Eicke to provide guards for the concentration camps. The SS forces grew in number from 18,000 on the eve of war to 140,000 in November 1941, including tank regiments and motorized infantry. They were intended from the outset to be an elite, ideologically committed, highly trained, and – unlike the army – unconditionally loyal to Hitler. Senior officers were notably younger than their army counterparts, mostly being born in the 1890s or early 1900s and so in their forties or early fifties at the time of the war. Military SS regiments were given names such as ‘The Reich’, ‘Germany’, ‘The Leader’ and so on. Again unlike the army, the Military SS was an institution not of the German people but of the Germanic race, and its leading figure, Gottlob Berger, a long-time Nazi and First World War veteran who was one of Himmler’s closest intimates, set up recruiting offices in ‘Germanic’ countries like Holland, Denmark, Norway and Flanders, forming the first non-German division (‘Viking’) in the spring of 1941. Further recruits from Eastern European countries followed, as numbers began to take priority over supposed racial affinities. By 1942 the Military SS numbered 236,000 men; in 1943 it exceeded half a million; and in 1944 it was approaching a strength of 600,000, of whom some 369,000 were active in the field.

Regular army commanders were disparaging of the Military SS, whose commanders they considered lacking in professionalism and over-inclined to sacrifice the lives of their men. Although the SS divisions were placed under their command, the army generals could do little to rein in their fanatical desire for self-sacrifice. When told by Eicke that his men’s lives had counted for nothing in an attack he had just carried out, the army general Erich Hopner, under whose command Eicke had been placed, roundly condemned this attitude: ‘That is the outlook of a butcher.’ However, the senior generals were not wholly averse to the Military SS spearheading attacks and taking the bulk of the casualties: it preserved the lives of their own men and reduced the strength of a serious rival force. Himmler complained in August 1944 that ‘people of ill-will’ in the army were conspiring to ‘butcher this unwelcome force and get rid of it for some future development’. Army commanders also alleged that members of the Military SS were more likely than their own troops to commit massacres of innocent civilians, especially Jews, and carry out other crimes, above all on the Eastern Front. An official army investigation in August 1943 noted that out of eighteen proven cases of rape reported to it, twelve had been committed by members of the Military SS. How accurate such reports were cannot be ascertained. The Military SS tended to provide something of an excuse for regular army commanders wishing to conceal, or pass over, the crimes committed by their own men. On the other hand, even officers from other branches of the SS were known to complain about its brutality. When the commander of the ‘Prince Eugene’ division tried to excuse to a minister of the puppet government in Croatia some atrocities committed by his men as ‘errors’, another SS officer told him: ‘Since you arrived there has unfortunately been one “error” after another.’ Attempts after 1945 by former Military SS officers to portray their troops as nothing more than ordinary soldiers failed to carry conviction, since there could be no doubt about their elite status or their fanatical ideological commitment. On the other hand, the mass of evidence that has come to light since the early 1990s about the conduct of regular troops on and behind the Eastern Front undermines claims that the Military SS was wholly exceptional in its disregard for the laws and conventions of warfare.

The undoubted fanaticism of the Military SS, as well as the tendency of military commanders to put its units into the front line, led to heavy losses among its troops. A total of 900,000 Military SS men served in the war, of whom more than a third – 34 per cent – were killed. On 15 November 1941 the ‘Death’s Head’ division reported losses of 60 per cent amongst officers and NCOs. Its backbone was gone, a report complained. The general view of the Military SS among the German people was, as the Security Service of the SS reported in March 1942, that it was poorly trained and its men were often ‘recklessly sacrificed’. Its men were thrown into battle because it wanted to show itself better than the army. Moreover, parents were beginning to try to stop their sons from enlisting because of the anti-Christian indoctrination to which they would be subjected in the Military SS. ‘Influence of parents and Church negative,’ reported one recruitment centre in February 1943. ‘Parents generally anti-Military SS,’ reported another. In Vienna one man told the recruiting officer: ‘The priest told us that the SS was atheist and if we joined it we should go to hell.’ Volunteers from Flanders, Denmark, Norway and Holland began to apply to be discharged, complaining of the arrogant and overbearing treatment of foreign recruits by German SS officers. Recruiting officers began to go to Labour Service camps and force young men to ‘volunteer’. Relatives complained about such actions, while Military SS officers soon declared themselves dissatisfied with the results, as many of the new recruits were ‘intellectually sub-standard’ and ‘inclined to insubordination and malingering’. The Military SS was rapidly deteriorating in quality towards the end of the war. But in this, it was doing no more than following the course taken by the regular armed forces themselves.