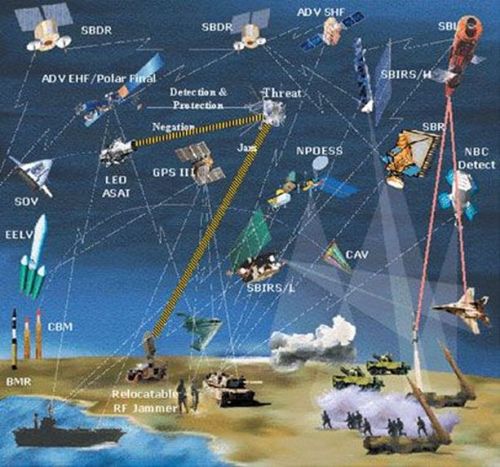 “The space program of today has its roots deep in the strategy of world domination through global terror pursued by the Nazis in World War II,” Jack Manno, a professor at the State University of New York, Environmental Sciences and Forestry College, pointed out in his seminal 1984 book Arming the Heavens: The Hidden Military Agenda for Space, 1945-1995. “Many of the early space-war schemes were dreamt up by scientists working for the German military, scientists who brought their rockets and their ideas to America after the war.”

Arming The Heavens details the development in Nazi Germany during World War II of the V-1 and V-2 rockets and how, at war’s end, the U.S. sought to grab as many of the German rocket scientists as possible. “It was like a professional sports draft,” Manno writes. And corporate America was deeply involved. Scientists from the Nazi Penenemuende Rocket Center “were turned over for interrogation to Richard Porter, who was in Germany representing the General Electric Corporation, which held the Army contract for the first long-range ballistic missile under development in the United States.” In the end, the U.S. “adopted nearly one thousand Germany military scientists, many of whom later rose to positions of power in the U.S. military, NASA, and the aerospace industry.”

“Wernher Von Braun and his V-2 colleagues … began working on rockets for the U.S. Army. They soon launched [at White Sands Proving Ground] in New Mexico the world’s first two-stage rocket, using a salvaged V-2 as the first stage and a smaller booster rocket that fired when the first rocket burned out,” Manno relates. “In 1949, with the beginning of the Korean War, the Army ordered Von Braun and his rocket team to the Redstone Army Arsenal at Huntsville, Alabama. They were given the task of producing an intermediate-range ballistic missile to carry battlefield atomic weapons up to two hundred miles. The Germans produced a modified V-2 renamed the Redstone.”

Huntsville began to become a major center of U.S. space military activities—which it continues to be—and soon “Von Braun began to emerge as the most dynamic spokesman for America’s budding space program.”

The U.S. military, on its Redstone Arsenal website, provides this narrative on Von Braun: “He became technical director of the Peenemuende Rocket Center in 1937, where the V-2 rocket was developed. Near the end of World War II, he led more than 100 of his rocket team members to surrender to the Allied Powers. Von Braun came to the United States in September 1945 under contract with the U.S. Army Ordnance Corps as part of Operation Paperclip. He worked on high-altitude firings of captured V-2 rockets at White Sands Proving Ground.” Von Braun and his “group” were then sent to the Redstone Arsenal in 1949 where he became director of development operations. After the creation of NASA, “Von Braun and his team were transferred” to it “and became the nucleus of the George C. Marshall Space Flight Center at Redstone Arsenal.” For ten years Von Braun was Marshall’s director, leaving in 1970 to go “to NASA Headquarters to serve as Deputy Associate Administrator.”

Former German Major General Walter Dornberger—who had been in charge of the entire Nazi rocket program—also becoming a powerful figure in the U.S. space program. “In 1947 as a consultant to the U.S. Air Force and adviser to the Department of Defense, Walter Dornberger wrote a planning paper for his new employees,” relates Manno. “He projected a system of hundreds of nuclear-armed satellites all orbiting at different altitudes and angles, each capable of reentering the atmosphere on command from Earth to proceed to its target. The Air Force began early work on Dornberger’s idea under the acronym NABS (Nuclear Armed Bombardment Satellites). As a variation on NABS, Dornberger also proposed an antiballistic-missile system in space in the form of hundreds of satellites, each armed with many small missiles. The missiles would be equipped with infrared homing devices and could be launched automatically from orbit. This concept was also taken under study by the Air Force in the 1950s. Labeled BAMBI (Ballistic Missile Boost Intercept), it was an idea that would reappear in the space-war dreams of the Reagan administration in 1983.”

Manno wrote in 1984: “The real tragedy of an arms race in space will not be so much the weapons that evolve—they can hardly be worse than what we already have—but that by extending and accelerating the arms race into the twenty-first century the chance will have been lost to move toward a secure and peaceful world. Even if militarists succeed in arming the heavens and gaining superiority over potential enemies, by the 21st century the technology of terrorism—chemical, bacteriological, genetic, and psychological weapons and portable nuclear bombs—will prolong the anxiety of constant insecurity. Only by eliminating the sources of international tension through cooperation and common development can any kind of national security be achieved in the next century. Space, an intrinsically international environment, could provide the opportunity for the beginnings of such development.”

It is now the 21st century and Manno was saying from his home in Syracuse that in the past as today “control over the earth” is what those who want to weaponize space chiefly want.

The Nazi scientists are an important “historical and technical link, and also an ideological link,” he said. As to claims of space warfare being defensive—from how Reagan characterized his Star Wars plan as a “shield” to the appellation “missile defense” today, “it’s all a smokescreen. The aim is to put all the pieces together and have the capacity to carry out global warfare including weapons systems that reside in space.” A new element behind Star Wars is the development of a global economy and what is deemed a need by those promoting it to have “control over the process of globalization.”