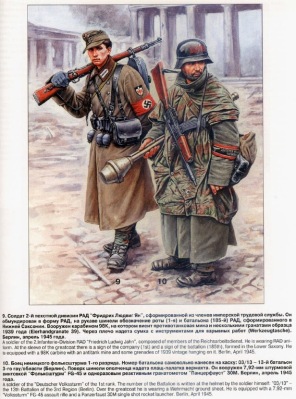 For a variety of reasons, German personnel losses are hard to determine with any precision. Few of these cobbled-together units kept any records of losses, German graves registration had largely ceased to exist, and sympathetic civilians buried some of those killed. To gain a sense of the intensity of the fighting in the Endphase (final stage), though, it is worth noting the latest calculations of German military deaths by Rüdiger Overmans. Through his careful and exhaustive research, Overmans has concluded that approximately 1.23 million German military personnel (including Volkssturm men, who suffered more than 50 percent of the entire losses) died in the final four months of the war. This average of roughly three hundred thousand killed monthly (compared with “only” one hundred thousand per month on the eastern front in 1944) represented the highest such German losses in the entire war. Even if one accepts his further estimate that two-thirds of the casualties in the Endphase occurred on the eastern front, that still leaves over four hundred thousand deaths during the hard fighting in the west. In the triangle of terror and destruction marked by Aschaffenburg, Ansbach, and Heilbronn, estimates of civilian deaths alone number over two thousand, with an equal number of soldiers sent to their deaths just in the region bounded by the Main and Neckar Rivers.

By throwing a mixed bag of men into battle, many with little training and all with insufficient weapons, supplies, and equipment, German commanders had sent their troops to the slaughter, in a futile attempt to offset iron with blood. No rationality or military purpose attended to this decision, for Germany was going to lose the war in any case. Rather, it illustrated the destructive will of Nazi political and military leaders, both against the enemy and their own population. In directing terror at all, Nazi authorities took little notice of the military situation and betrayed no regard for the well-being of the local civilian population. All villages and hamlets were to be used as obstacles and defensive positions, with the result that many heretofore untouched by war fell victim to the wave of destruction unleashed in the last days of the conflict. To the average citizen this meant only unnecessary and pointless terror and devastation. But to the Nazi leadership, having created a system that reveled in terror and unwilling to bring the destruction to an end, there existed another goal, yet realizable. For Hitler, the end of the Nazi regime and the end of the German people and nation were to be synonymous.

As war had assumed a life of its own, independent of the will of the people, many Germans ironically saw their own soldiers as a greater danger than the Americans. While Nazi propaganda continued to portray Volk and army, citizen and soldier, forged together and fighting side by side, civilians for the most part just wanted the war to end, while Landers numbly fought on, exhausted from their exertions, ground down by overwhelming enemy superiority, and suffering from lack of supplies. The hesitancy of the American advance, in a further paradox, ensured that more Germans, both soldiers and civilians, would be killed—by both sides—and more villages destroyed. For the civilian population, threatened by brutal Nazi measures at the end of war, trust in the regime finally came to an end. People could now see with their own eyes the senselessness of continuation of the war, for there no longer existed any possibility of winning or even defending against the enemy. At the end of this war most Germans wanted only to preserve and salvage what could be preserved and salvaged. They had already begun thinking of the future and of the task of reconstruction. An advertisement in the Windsheimer Zeitung for a local bank put it succinctly, “save in war, build in peace!”