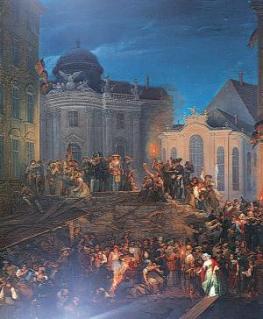 Without the cooperation of the traditional elites in the various kingdoms and lands, the multi-ethnic Habsburg Empire could not be held together. At the same time, it was the dynasty that provided the indispensable unifying bond. Therefore nationalism and the sovereignty of the people were not only anathema to the dynasty, but a deadly threat to the political survival of the union of lands and crowns ruled by the Habsburgs. Since the late eighteenth century, the Austrians sought to contain or destroy revolutionary and nationalist movements. This policy proved costly. In the wars against revolutionary France and Napoleon from 1789 to 1815, Austria not only lost the Netherlands, south-western Germany, and northern Italy but, after the defeat at Wagram in 1809, was forced to cooperate with Napoleon to avoid another armed clash with the French emperor. The new Austrian foreign minister, Count Klemens von Metternich, nevertheless decided to break with Napoleon and re-join the anti-Napoleonic coalition in 1813. Together with his British counterpart, Lord Castlereagh, Metternich worked for a lasting European settlement in 1814–1815, in the wake of Napoleon’s final defeat. The Congress of Vienna in 1815 and the working of the Congress system until the 1820s gave Austria more than its due share of political influence in Europe. In terms of territory, Austria gave up its former possessions in south-western Germany and the Netherlands. Instead, Salzburg became Austrian and the Habsburgs kept most of the Polish territory acquired in 1774 and 1795. In Italy, Lombardy and Venetia formed a kingdom united with Austria.

In 1804, in response to the self-coronation of Napoleon as Emperor of the French, Holy Roman Emperor Francis II claimed the title of hereditary Austrian emperor. Under French pressure, Francis in effect dissolved the Holy Roman Empire in 1806. At the Congress of Vienna in 1815, Metternich refrained from any attempt to resurrect the Holy Roman Empire, and in the newly created German Confederation Austria chaired the deliberations of the diet but could not achieve much without Prussian consent. Still, through Metternich’s skilful diplomacy, the Habsburg Empire was able to win the support of Prussia and other German states to use the confederation as a tool to suppress liberal and nationalistic groups in Germany. In Italy there was no equivalent of the German Confederation, so Austria intervened militarily when revolutionary movements threatened to destabilize the Italian states. Austrian anti-revolutionary zeal undermined the solidarity among the Great Powers and damaged Austro-British cooperation in the 1820s; Metternich found himself isolated when Britain, France, and Russia fought for the independence of Greece from Turkey in 1827. Austria refrained from a policy of territorial expansion on the Balkan Peninsula and considered the preservation of the Ottoman Empire as indispensable to its own survival. The Habsburg Empire thus acted as the most clear cut case of a status quo power and annexed Kraków only to contain the spread of Polish nationalism. Unable to establish an efficient tax-system, however, the empire suffered from inadequate financial means to play the role of Great Power. Overcommitted and underfinanced, Austria depended on a favorable climate of anti-revolutionary consensus and a preference for peaceful crisis settlement among the other Great Powers. Austria’s policy of repression, directed against liberals and nationalists at home and abroad, collapsed in 1848.

The revolution of 1848–1849 challenged Habsburg rule in several ways. In Vienna, a liberal government replaced Metternich, and an assembly was summoned to deliberate and decide on a new constitution. In Hungary, nationalists took control and were fighting for independence. In Italy, nationalist uprisings and an attack on Piedmont-Sardinia aimed at the expulsion of Austria from the region. With young Emperor Francis Joseph and a conservative government under Prince Felix Schwarzenberg in charge, the Habsburgs were able to fend off the danger. By 1850, the Habsburg rule had been restored, as was the German Confederation. Francis Joseph’s neo-absolutist regime was based on tradition, repression, economic progress, and prestige. During the Crimean War (1853–56), Austria’s policy offended a Russia Empire that had supported the Habsburgs against the Hungarian insurgency in 1849 yet did not lead to an alliance with France and Great Britain. In 1858, the French Emperor Napoleon III formed an alliance with Piedmont-Sardinia to expel Austria from northern Italy. In response to Sardinian provocations, the Habsburg monarchy went to war. Defeated by the French-Sardinian alliance in the Battles of Magenta and Solferino, Austria was forced to cede Lombardy in 1859. The Habsburg Empire had no choice but to watch helplessly from the sidelines as the Italian kingdoms and principalities were swept aside by a combination of nationalism and Sardinian power politics. The next blow to Habsburg prestige came in the 1860s when Prussia under Prime Minister Otto von Bismarck outmaneuvered Austrian foreign policy in the debate about a reformed German Confederation and the future of the former Danish duchies of Schleswig and Holstein, both occupied by Austrian and Prussian forces after the German-Danish War of 1864. The Prussian secession from the German Confederation led in 1866 to war between Prussia and Austria and most of the other German states. The Battle of Königgrätz ended with a clear Prussian victory and forced Francis Joseph to accept Austria’s exclusion from Germany. Victories over Prussia’s ally Italy in the Battles of Custoza and Lissa were of little political significance and could not prevent the loss of Venetia. The creation of two new nation-states, Germany and Italy, had come at the expense of the Habsburg Empire, which could survive as a Great Power only as long as the opposition within it could be mollified.