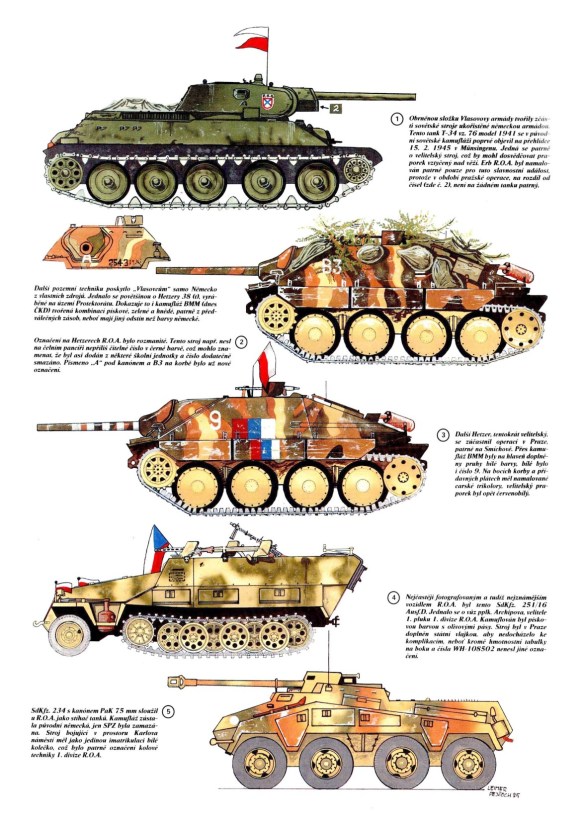 By the middle of 1944, Vlassov’s formation, the Russkaia Osvoboditelnaia Armiia (ROA – the Russian Army of Liberation) was not an army in the sense of a military organization. Units that bore its name were mostly commanded by German officers, and were dispersed all over Europe. General Vlassov and his Russian National Committee had no influence whatsoever, and were not recognized by the German Government. In July 1944, however, Himmler, seeing the dire situation the Reich was in, decided to meet with Vlassov (the Reichsführer-SS at this time had great power, being Chief of the SS, Chief of the Police, including the Gestapo, Minister of the Interior and, since the attempt on Hitler’s life on 20 July 1944, also Commander of the Reserve Army). Because of the attempt on Hitler’s life, the meeting did not take place until 16 September 1944. Himmler agreed to the creation of a new committee called the Komitet Osvobozhdeniia Narodov Rossi (KONR – Committee for the Liberation of the Peoples of Russia), and to the creation of the KONR Army under General Vlassov’s command. The committee and army were to embrace all Soviet citizens living under German rule, in order to unite their political and military activities in the fight against Bolshevism. To begin with, five divisions were to be organized from among POWs and workers brought to Germany from the occupied territories in the East (by this time, the Red Army had entered Poland, reached East Prussia and was at the Yugoslav border).

The representatives of the non-Russian nationals, who wanted to sever all ties with Russia and create their own independent states, were against the idea of the KONR Army. Despite Himmler’s threats, the Ukrainians, White Ruthenians (a former province in eastern Czechoslovakia), Georgians and Cossacks refused to join the KONR.

All decisions and instructions had to be “coordinated” with the appropriate German commissar. Nevertheless, the publication of the Prague Manifesto made a deep impression on many Russians. First of all, it brought forth a great number of voluntary applications for service in the KONR Army, a number that surpassed all expectations. On 20 November, for example, 60,000 applications were received. Large numbers of volunteers from among POWs and Soviet refugees who had left their native lands voluntarily with the retreating German armies, preferring a wandering life in strange and perhaps unfriendly lands to a return under the NKVD yoke, were received. Bizarrely, desertion from the Red Army to the Germans increased after the publication of the manifesto, despite the looming defeat of Nazi Germany.

The KONR Army had begun to form in November 1944, accompanied by shortages of arms and equipment. As a result of the deteriorating military situation in the East, the five divisions were reduced to two. Despite his difficulties, Vlassov formed an army headquarters, two motorized divisions, one reserve brigade, an engineer battalion and support units – a total strength of 50,000 men. On 28 January 1945, he officially took command of the army.

The 1st KONR Division, under the command of General Sergei Kuzmich Bunyachenko, was given the name 600th Panzergrenadier Division. Its organization began in November 1944 at Muensingen, and operational readiness was reached in mid-February 1945. The nucleus of the division consisted of the remnants of the 30th SS Waffen Grenadier Division (Russian No 2), which had been greatly reduced during the fighting in France, and the remnants of the infamous Kaminski SS division. When the rabble of the latter formation arrived at the camp where the division was being formed, gangs of armed and unarmed men in all kinds of uniforms, accompanied by women in gaudy dresses, spilled out of the railway carriages. At the sight of them, Bunyachenko exclaimed in anger: “So this is what you’re giving me – bandits, robbers, thieves. You’ll let me have what you can no longer use!” Amazingly, despite acute shortages of arms, equipment and supplies, at the beginning of April the division reached the front on the River Oder.

The 2nd KONR Division, under the command of General G. A. Zveryev, was named the 650th Panzergrenadier Division. Its formation began in January 1945 in Baden, some 69km (43 miles) from the camp of the 1st Division. Owing to the shortages in arms and equipment, it never really reached operational readiness. The nucleus of the division consisted of a few battalions withdrawn from Norway, and some recently captured Russian prisoners. In addition, the KONR Army’s headquarters, the reserve brigade, the engineer battalion, the officers’ school and other units, in all some 25,000 men, were being formed in the same area as the 2nd Division. The organization of the 3rd Division was begun in Austria, but its strength apparently never exceeded 2700 men.

In mid-April 1945, the 1st Division was given the task of capturing the Soviet bridgehead in the area of Frankfurt-on-Oder. This bridgehead had been previously attacked by the Germans, but without success. The attack of the 1st Division also failed, with heavy losses owing to lack of adequate artillery and air support. After the failure of this attack, Bunyachenko withdrew the division on his own authority, and a few days later began the march towards the frontier of Czechoslovakia, together with other Russian volunteers – more than 20,000 men in all. On the way, the Germans tried in vain to induce him to obey their orders. At the end of April, the division reached the frontier of Czechoslovakia where Vlassov himself joined it.

The Saga of the KONR Army

On 2 May, they stopped short of Prague where they were informed that the army’s headquarters, 2nd Division and the remaining formations of the KONR were on their way through Austria to Czechoslovakia.

At this time, Prague seemed to be the objective of both the American and Soviet armies which were approaching from two directions. This induced the Czechoslovak National Council to call for an uprising against the Germans, which began on 5 May. On the same day, the Czechs implored the Allies by radio to come to their aid because Prague was threatened by the Germans. Receiving no reply to its appeal, the council turned for help to General Bunyachenko. On the morning of 6 May, the 1st Division joined the fight, and by the evening had cleared Prague of SS troops. The Czechs greeted Vlassov’s men joyfully, but the next day Bunyachenko was informed that Prague would be occupied by the Red Army, not by the Americans as he had expected, and that the Czechoslovak National Council was being replaced by a pro-Soviet government headed by Eduard Benes. The latter demanded that the forces of General Vlassov were either to await the Red Army’s entrance in order to surrender, or leave Prague as soon as possible. On the morning of 8 May, General Bunyachenko’s troops began to march towards the same area from where they had come only four days before.

A few days after leaving Prague, the 1st KONR Division laid down its arms in the Czech village of Schluesselburg in the American zone. On 12 May, Bunyachenko was informed that Schluesselburg would be included in the Soviet zone, and that the local American commander did not consent to letting the division march beyond the new demarcation line. The only possible solution, suggested the Americans, was that the soldiers of the KONR might try to cross over to the American zone individually. General Bunyachenko immediately disbanded the division, advising his subordinates to try their luck on their own. During the flight, however, many were shot by Soviet troops and the majority were captured by the Red Army. Some 17,000 of them are said to have been deported to Russia, where they suffered death or life imprisonment. General Vlassov himself fell into Soviet hands on 12 May.

The 2nd KONR Division split into two parts; the greater part, together with the Pannwitz’s Cossack corps, surrendered to the British on 12 May in Austria, to be interned in the area of Klagenfurt. One regiment of the 2nd Division and the army’s headquarters reached the American zone after a long and weary journey, and were interned at Landau in western Bavaria. Thus ended the saga of the ROA.