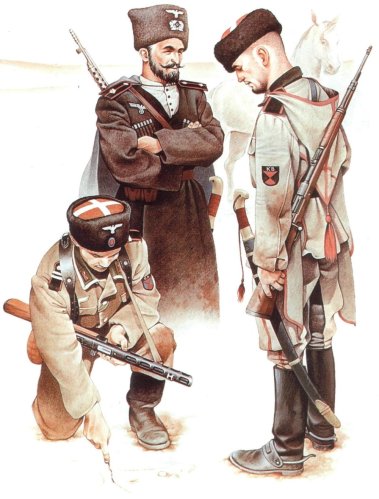 The problem of the Cossacks

In September of 1944, the German authorities allocated Northern Italy to the Cossacks for resettlement. This region was chosen because it was far from the Soviet lines and was one of the small not-German areas that were still situated inside the territories of the decreasing Third Reich.

The Cossacks settled first in Gemona del Friuli, but quite soon they moved to Tolmezzo in the Carnic Alps. Already before their arrival, they had been promised land and houses, which of course extremely irritated the local inhabitants.

Again, the Cossacks tried to start a life as in a Don-stanitsa. They formed a settlement rather than a military force, though their ‘regiments’ waged war against the communists again.

In the winter of 1944-1945, the allied intelligence services in Italy received messages that a large Cossack group had settled in the far end of Northern Italy. Since Suvorov’s famous campaign in 1799, this was the first time that they showed up in the Alps, but it was no surprise. British and American troops had continually arrested little groups of Russians, mostly members of convict battalions.