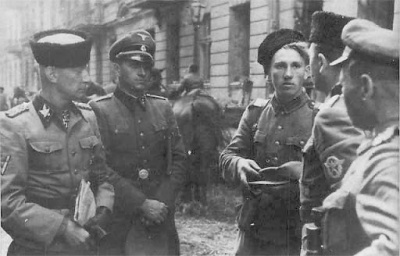 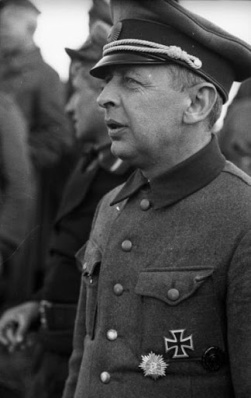 The German Army had one last opportunity in 1942 to recover from its failure to secure the occupied areas and pre-empt the massive expansion of the partisan war to an uncontrollable scale. A number of senior field commanders that understood the reality of the situation raised warnings back to Berlin that continuing the current occupation policies would further antagonize the indigenous population and only strengthen the ranks of the partisan bands. Some advocated that the German Army could separate the indigenous people in the occupied areas from Stalin by gaining their trust through fair treatment and allowing some degree of self rule. Field Marshal Günther von Kluge, the Commander of Army Group Center, declared “he could successfully fight the Soviet partisans only if Berlin promised to create a new Russian state and instituted a policy ending collectivization.” In February 1942, Hitler responded to the growing course of arguments emanating from his commanders in the East:

Germany wages war in the East for self-preservation, that is, in order to improve the basis for a secure food supply for Europe, but particularly for the German nation. It is not the purpose of this war to lead the people of the Soviet Union to a happier future, or to give them full freedom or political independence.

Hitler’s message to the German Army in the Soviet Union in early 1942 did not provide the pragmatic planning guidance the German Army needed to confront the growing partisan war. By this point in the war, most German Army commanders realized they had squandered their opportunity to establish an effective administration for the occupied areas. It was during the spring of 1942 however, that some innovative German commanders actually implemented effective security and anti-partisan solutions that achieved local success. These operations marked the first and only period in the war where the German Army actually created pockets of stability within the military zone of operations and made substantial progress against the partisan movement. One of the most successful examples that illustrated the potential of using indigenous security forces was the Kaminski Brigade experiment in self-rule and indigenous anti-partisan operations in the Second Panzer Army Rear Area beginning in the spring of 1942. Indigenous units like the Kaminski Brigade represented an effective alternative to the “force and terror” policy of direct military control on the Eastern Front.

In the spring of 1942, partisan bands controlled almost the entire rear area of Army Group Center’s area of operations and the number of partisan attacks had significantly increased, particularly in the Bryansk sector. A group of officers on the Army Group Center staff studied the problem and reported their findings to Army High Command:

A necessary precondition for the lasting destruction of the partisans is the friendship of the Russian population. If we do not achieve this, the partisans will have every means of obtaining supplies and recruits assured them … it is difficult for a primitive people to believe in the friendship of someone who has taken his last cow.

While the Army Group Center planners realized the necessity for a radical paradigm shift in occupation policy, it lacked sufficient resources to implement these manpower intensive policies in the rear areas. In the spring of 1942, the German Army in the East was experiencing the first of many manpower crises. As a matter of expediency, the Army High Command finally allowed for “additional native units to be enlisted from among anti-Soviet inhabitants and reliable former prisoners of war.”

Fortuitously, around the same time German railway repair troops under constant partisan attack in the Bryansk area “encountered a heavily armed group of Russians wearing white arm bands with a St. George’s cross on them.” The group was under the command of Bronislav Kaminski, a fervent anti-communist. The band consisted of 1,400 well-armed men who had been fighting the Red Army and the partisan bands in the Bryansk sector in the weeks preceding the arrival of Second Panzer Army. A representative of Kaminski was escorted to Second Panzer Army headquarters in Orel where he promptly assured the German command that Kaminski’s Brigade was “ready to actively fight the guerillas” as well as carry on a propaganda campaign against the communists and the partisans. General Rudolf Schmidt, the commander of Second Panzer Army, subsequently appointed Kaminski Bürgermeister (mayor) of an area within Körucke (Army Rear Area) 532 centered on the town of Lokot (41,000 inhabitants). Kaminski’s indigenous authority was responsible for all security issues and all economic and political life within the Lokot district. General Schmidt established a chain of command where Kaminski was answerable only to himself.

With the approval of the commanders of Army Group Center (Field Marshal von Kluge), Second Panzer Army (General Schmidt) and Körucke 532 (General Bernhard), Kaminski quickly introduced a series of reforms in the Lokot district. He returned parcels of private land and livestock to local peasants and at the same time persuaded the Korücke to crackdown on looting by German Army units. Additionally, he combined a series of fortified villages with an expanded self-defense unit to create an integrated anti-partisan defense plan for the Lokot district. The local peasants, with a newfound economic stake in the program’s success and a measure of protection from partisan retribution, increased agricultural production and were able to sell excess foodstuffs to the Army through an open market system. The improvements in security and logistical support for the Army were achieved at little cost in manpower. There were no occupation units assigned within the district and the Army’s main role was advisory, namely a Korücke liaison officer (Major von Veltheim) and a tactics expert (Colonel Rübsam). Korücke 532 reported to Army Group Center in August that the Kaminski experiment was “a highly successful method, far superior to the direct military level system imposed elsewhere.”

Over the next year, the Kaminski Brigade grew in strength from under 2,000 to over 10,000 well-armed men with substantially increased firepower, good transport and strict discipline. The Kaminski Brigade began to conduct large-scale anti-partisan operations in Korücke 532 beyond the Lokot district. An assessment of the partisan situation shows the Kaminski Brigade’s effectiveness: in December 1941, partisans controlled the entire rear area of Army Group Center in the Bryansk area and an estimated 7,000 partisans roamed the Bryansk-Lgov-Kursk rail line. By the end of 1942 however, the entire Lokot “liberated region” was cleared of partisans and the Bryansk-Lgov rail line was secure out to a distance of four miles. The Kaminski Brigade also had a major impact on the propaganda war outside the region, the Soviet government in Moscow made a number of unsuccessful attempts to assassinate Kaminski and issued a standing bounty of 200,000 rubles for his life. Alexander Pronin argues that the Kaminski Brigade was the most successful collaborative anti-partisan effort of the war and was “one of the best illustrations of the exercise of initiative by a local commander” in the partisan war (General Schmidt).

In summary, three key questions concerning the Kaminski Brigade deserve closer analysis. Why did the practice of limited self-government and indigenous anti-partisan units initially succeed in Army Group Center? Why did it ultimately fail? Lastly, why were other collaborative efforts like the Kaminski brigade not expanded to the rest of the occupied areas?

Three factors standout concerning the relative success of the Kaminski Brigade. First, General Schmidt assumed risk (political as well as tactical) in return for a creative, high-payoff solution and established a streamlined chain of command to support Kaminski. Secondly, Kaminski prioritized meeting the local populace’s “hierarchy of needs” (security, economic opportunity, some possibility of self-government) before taking on loftier objectives. Third, both Kaminski and Schmidt realized the necessity to reduce the presence of the German Army in the Lokot district. This measure reduced friction within the district from the naturally occurring animosity between the proximity of an occupying force and the local inhabitants. In this case study at least, it appears that reprehensible behavior is more palatable to the local population when the “doer” is a homegrown security force versus a foreign occupying army.

Three factors played a large role in the Kaminski experiment’s ultimate failure. Obviously, when the Red Army seized control of the Lokot district, Kaminski’s Second Panzer Army patrons were forced to withdraw leaving the situation untenable for Kaminski. However, the Brigade was deemed so valuable by Army Group Center that it was transferred west in September 1943 during the German retreat. But even before the arrival of the Red Army, the experiment was a classic case of too little, too late. By the time General Schmidt implemented the program, a large and well-organized partisan domain was already established in the surrounding districts of the Korücke. This suggests that in the co-evolution of partisan and anti-partisan competition, there is a window of opportunity early on in a campaign that must be exploited by the occupying force. Finally, the Clausewitzian element of friction was active in Army Group Center. Many subordinate commanders, Germans as well as allied units such as the Hungarians, had a tremendous animosity towards Kaminski’s Brigade over race, the unit’s autonomy, and the commander’s often brazen treatment of German and allied officers. This petty jealousy often worked to frustrate Kaminski’s efforts unbeknownst to Army Group Center or Second Panzer Army.

Other collaborative programs were implemented in various regions of the occupied areas but not on the scale or to the degree of success as the Kaminski Brigade. Although some German commanders realized the need for a paradigm shift in occupation policy, if only for pragmatic rather than altruistic reasons, the results of the Kaminski Brigade experiment were not powerful enough to overcome the entrenched National Socialist view of the war in the East. The pragmatic concerns of frontline commanders were unable to co-exist with Nazi political ideology. The German occupation policy at its core was based on exploitation of the Russian people and a belief that the Russian people were already accustomed to brutal repression under the communist state. A pragmatic policy of self-rule and collaborative anti-partisan operations required a measure of autonomy and regard for the basic welfare of the indigenous population. For this reason, the Kaminski Brigade experiment was an isolated success.

As the year 1942 drew to a close, it is clear that last chance the German Army had in securing the occupied areas within the zone of military operations had passed. The broader operational picture on the Eastern Front, which included the loss of an army at Stalingrad in the winter of 1942-1943 and the debacle at Kursk the following summer, dictated that the German Army commit every available resource at it disposal against the Red Army. The partisan movement subsequently grew in scale and intensity from late 1942 to its apogee in the summer of 1944.91 During Operation Bagration, the destruction of Army Group Center by four Soviet fronts, the partisan forces operated in large-scale formations seizing key terrain blocking the German withdraw and executing massive attacks against conventional German formations. The partisan operations conducted after 1942 are beyond the scope of this study. However, the transition of the partisan movement from an ad hoc guerilla resistance to a massive 500,000 man paramilitary force conducting operational-level shaping operations later in the war reinforces the significance of that period of transition operations in the initial period of war. Had the German Army envisioned an operational-level approach utilizing indigenous security forces similar to that of Second Panzer Army and the Kaminsky Brigade early in the Barbarossa campaign, the situation in the occupied areas could have been more conducive to conducting sustained operations against the Red Army in 1943-1944.

1 thought on “1942- One Last Opportunity: The German Experience with Indigenous Security Forces”